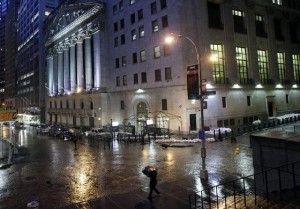 Numerous reports over the past year – published by mainstream, high profile groups – have raised alarms about the risks we face if we fail to act, or act too slowly, to reduce our carbon emissions and by extension the accelerating effects of climate change.  The most recent report, released on June 24th and highlighted in this article from CBC news, brings together “peer-reviewed climate science projections [and] estimates of the impact of projected changes in temperature, precipitation, sea levels, and storm activity” to demonstrate the future economic impact of climate change. The costs are staggering, and include property losses in coastal areas, reduced crop yields and outright crop failures, and extreme-heat-related deaths.

The report is sponsored by the Risky Business Project, a group that might sound radical but in fact is comprised of mainstream political and financial figures, including: Michael Bloomberg, former mayor of New York City; Henry Paulson Jr., former US treasury secretary; and Thomas Steyer, billionaire founder of Farallon Capital Management. Former US Secretary of State George Schultz, who served under President Regan, is a committee member, as are several other senior US political figures – Democrats and Republicans.

The report argues that businesses must begin to factor the risk of losses from climate disruption into their cost of doing business, and must act decisively to reduce their carbon emissions. It uses the kind of risk assessment approach that businesses would normally apply to any major decision, and produces a range of probable outcomes. While the report paints a grim picture of the cost of inaction on carbon emissions, which means essentially continuing on our current course, it offers hope that “if we act now, [we] can still avoid most of the worst impacts and significantly reduce the odds of costly climate outcomes—but only if we start changing our business and public policy practices today.”

With the growing body of evidence that we cannot afford to put short-term economic interests above climate priorities, our Prime Minister’s position on this issue  is both baffling and deeply disturbing. Divestment from fossil fuels to reinvest in a low carbon future provides an opportunity for us to raise our collective voices, and to make it clear to our political and business leaders that it’s time they started to listen and to act!

As Olympia Snowe, Risk Committee member for the Risky Business Project and former US Republican Senator, so wisely challenges us, “If we were told—in any sphere—that we had at least a 90% chance of averting a disaster through changes we ourselves could make, wouldn’t we take action?”