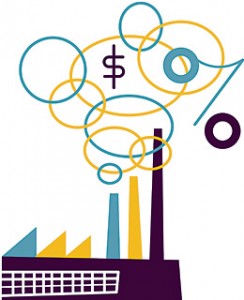 In this excerpt from a recent article in Maclean’s,  Chris Ragan, from McGill University demonstrates how BC’s revenue-neutral carbon pricing policy has been successful in reducing fossil fuel use.  “Most Canadians agree that we should not have to sacrifice our economy for our environment, or vice versa. Examples like this show we don’t have to.”

“The relationship between our economy and the environment has been one of the most important and prominent discussions of the past year, globally and here in Canada. We are approaching a turning point in that discussion—a realization that it is both necessary and possible to build a strong economy underpinned by the health of our land, air, and water. We have a real opportunity in the year ahead to focus on practical solutions for achieving that goal. As an economist, I believe that opportunity lies in redesigning our provincial and municipal fiscal structures to encourage the positive economic activities we want (innovation, investment and better jobs) while discouraging the harmful ones we don’t want (pollution and escalating greenhouse gas emissions). BC’s revenue-neutral carbon pricing policy is a textbook example of how this can work successfully.

As the chart below illustrates, in the five years since the introduction of the policy, B.C.’s fuel use (the main source of greenhouse gas emissions) has dropped 16.1 per cent; over the same period without carbon pricing in the rest of Canada, fuel use has risen. Of course, the chart does not establish a strict causal effect of B.C.’s policy — but it is very suggestive. In addition, the chart does not show that over the same period B.C.’s GDP kept pace with that in the rest of Canada. Nor does it show that, as a result of personal and corporate income-tax cuts enshrined in the policy, B.C. now has among the lowest personal and corporate income tax rates in the country. Most Canadians agree that we should not have to sacrifice our economy for our environment, or vice versa. Examples like this show we don’t have to.” 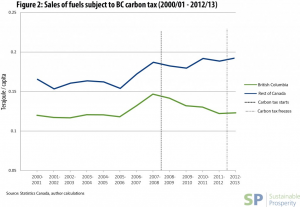