The US and China have surprised the world by signing a substantial climate agreement. The US pledges to reduce greenhouse gas emissions by 26-28 percent below 2005 levels by 2025. China pledges that by 2030 its emissions will have peaked and 20% of its energy will come from non-fossil fuels.

Is it a coincidence that this announcement comes shortly after the biggest climate demonstration ever? We think not.

The deal certainly turns up the heat on countries, including Canada, that have been hiding behind US and Chinese inaction. 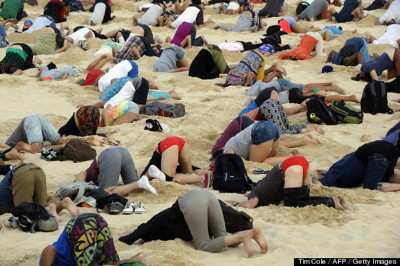 Australia is another country caught flat-footed, with the added awkwardness that they are currently hosting the G20, where they have resisted mention of climate change on the agenda.The Australian Prime Minister, who has in the past called climate science “crap” and recently repealed the country’s carbon tax, has drawn the ire and mockery of many Australians, some 400 of whom protested by burying their heads in the sand of Bondi Beach (inspired by a similar protest on September 21 in Townsville, Queensland).