1. We are on track for 4 degrees Celsius of global warming this century if we continue to rely on fossil fuels—and greater warming later. That’s really bad news…

2. Four degrees of warming is much worse than it sounds. To many Canadians, 4 degrees of warming may sound rather nice. But according to the World Bank, 4°C of global warming would have “devastating impacts on agriculture, water resources, ecosystems and human health”, caused in part by “unprecedented heat waves, severe drought, and major floods”. Sea levels would rise by up to two meters by the end of the century, and continue to rise as the ice caps melt. Millions of people would become refugees and millions more would suffer from hunger and disease. These stresses would lead to conflict and even war. Approximately 10% of species on the planet would become extinct. 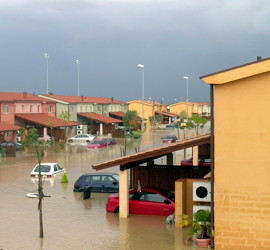 3. Worse still, feedback loops—due to the ice caps shrinking and reflecting less sunlight, more water vapour in the atmosphere trapping more heat, and methane being released as the tundra thaws—mean that there might be a climate “tipping point” after which runaway warming becomes unstoppable. That would be disastrous.

4. All this is not inevitable, but the problem is urgent. A combination of technological, legal and lifestyle changes can avert most of the warming, but only if we act now, and make major changes in the next 10 years. These changes would not be unreasonably expensive, and would actually create more jobs. 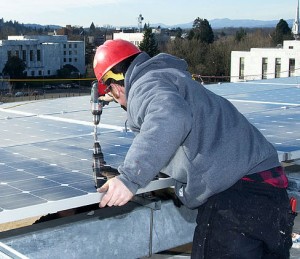 Image via Oregon Department of Transportation

It’s politically possible too: in Canada and the US, the majority of the population are convinced that human-caused global warming is a problem and that we should act to limit it.

5. Because carbon pollution stays in the atmosphere for hundreds of years, the number to focus on is our total cumulative carbon emissions from now on. To limit global warming to a relatively safe level, our total emissions have to stay within a “budget” variously estimated at between 500 and 1000 Gigatonnes (i.e. billion tonnes) of CO2. We are currently on track to burn through this budget in 15 to 30 years. Global known fossil fuel reserves contain the equivalent of about 3000 Gigatonnes of CO2. So, to avoid dangerous global warming, we need to leave most fossil fuels in the ground, for hundreds of years.