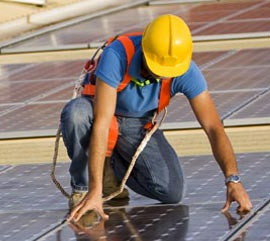 Solar is the fastest-growing energy sector in the US, employing 86% more people than five years ago.

A report by the Union of Concerned Scientists found that if the US federal government established a standard requiring utilities to obtain 25 percent of their electricity from renewable sources by 2025, it would create 297,000 new jobs.

A study by the American Council for an Energy-Efficient Economy found that a national standard requiring utilities to institute programs reducing electricity demand by 15 percent and natural gas demand by 10 percent would generate more than 220,000 jobs by 2020.